For Your Wedding, Reception or Event in San Diego

“The Cosmopolitan is amazing. It was so fun having the whole hotel upstairs rented out for the bridal party all weekend, and seeing people hanging out in old town and at the hotel nearby. It felt like a small little wedding town!”

Imagine Old Town San Diego in the 1830s – no trees, no grass, no wooden buildings – just a handful of adobe homes scattered around a dry, dusty plaza. Between 1827 and 1829, Juan Bandini had a U-shaped home built off one corner of the plaza. Compared to most of the other modest adobes, Casa de Bandini was a grand mansion and the social center of town. The rooms had thick, insulating adobe walls. The ceilings were covered on the inside with heavy muslin to trap insects, dirt and straw that fell from the thatch roof.

Construction of the casa was a colossal undertaking. It contains an estimated 10,000 adobes bricks, weighing as much as 60 pounds each. The foundation, made of large round river rocks, rose four and a half feet above ground at the corner facing the plaza.

The Cosmopolitan was born to party. Juan Bandini built his adobe mansion to keep his family safe and comfortable, but also so he would have a place to host the elaborate fandangos, dances and parties he loved so well. Don Juan’s hospitality was the stuff of legend throughout California and beyond and he threw elaborate 10-day-long parties that brought the whole town out for whatever the celebration of the moment was.

So great was his love for dancing that he built what was likely San Diego’s first wooden floor. It was on that floor that the waltz was first danced in the state of California.

When the Seeleys purchased the home and turned it in to a hotel, they continued the tradition of opening the Cosmopolitan up as the social center of town, also throwing exquisite parties that were often the talk of the town.

We invite you to add your party to this long tradition.  Whether you are celebrating with just a few friends or with 300+, the Cosmopolitan will welcome you and your guests with open arms and huge smiles.  Just the way Juan would have.

A wedding at the Cosmopolitan is really a wedding in Old Town San Diego.  There are a wide variety of historic, scenic, exciting options for your wedding ceremony besides having it at the Cosmopolitan.  Some people prefer to keep all the action in one place, others like the flexibility of choosing a separate location for the ceremony.  Your Cosmopolitan planner will help you navigate all of the options, help with permits, fees and bookings and, together, create the perfect experience for the perfect day.

To get started or to get our complete information packet, email events@sdcosmo.com. 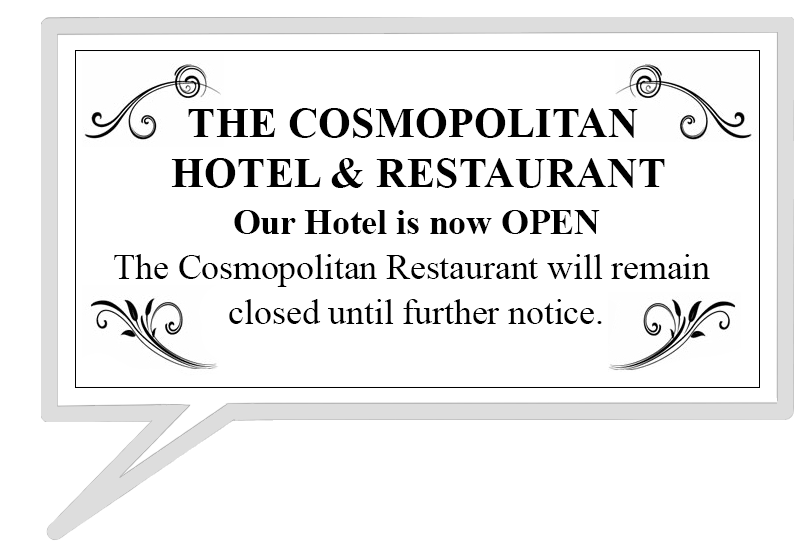